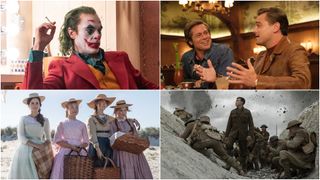 The Golden Globes have passed. The BAFTA nominees have been announced. Next up, the one we’ve all been waiting for: the Oscars 2020 nominations.

Thanks to numerous awards having either taken place or the nominees having already been announced, we have a pretty clear read on who will be nominated for Oscars this year. Leading the charge are 1917, Once Upon a Time in Hollywood, The Irishman, Parasite, and  Joker, which all seem bound to take home nods for Best Picture. Outliers, who could very well be in the running for the main prize, include Marriage Story, Little Women, Jojo Rabbit, and even – by a stroke of luck – Adam Sandler’s high-octane return to more serious drama, Uncut Gems.

With all that in mind, the GamesRadar+ and Total Film teams have come together to present the following Oscars 2020 predictions, which will be updated weekly as the ceremony approaches. So, without further ado, here’s who we think will be nominated, and who could win, at this year’s Oscars.

Contenders: 1917, Joker, Once Upon a Time in Hollywood, The Irishman, Parasite

RECOMMENDED VIDEOS FOR YOU…

Likely winner: Sam Mendes’ 1917 scooped the Best Motion Picture – Drama award at the Golden Globes, launching the Bond director’s World War One movie to the forefront of our Oscars 2020 predictions list. Edited to look like it was shot in one-take, 1917 is a phenomenal technical feat – something the Oscars voters adore.

However, something Oscars voters love more is a movie that feels “classic Hollywood” – and, by that, we mean any movie that celebrates cinema itself. Enter Quentin Tarantino’s Once Upon a Time in Hollywood, a love letter to the easy-going Hollywood of decade’s past. We named it the best movie of 2019, so there are no qualms with Tarantino taking home the Oscars’ most prestigious award.

Underdog: Having taken home the Best Foreign Language Motion Picture award at the Golden Globes, Parasite will likely do the same at the Oscars. The big question is, has Bong Joon-ho’s scathing social commentary on Korea reverberated with voters enough to get a Best Picture nomination? Hopefully, with BAFTA and Golden Globe nominations behind it, Parasite will be in the running for the big prize.

One surprising movie that has received less awards chatter than anyone expected is Little Women. Greta Gerwig’s take on the iconic American novel has won rave reviews but hasn’t landed on the awards circuit thus far. Perhaps the movie’s late December release date meant that few people had actually seen the movie? Or was there a problem with men not wanting to see the movie? Whatever the case, our fingers are crossed that Little Women can land a nomination.

Likely winner: Nobody, not even Warner Bros., expected Joker to be the colossal hit the movie has become. Yet, here we are, with Joker having broken box-office records for R-rated movies and entered the awards debate in a big way. While the villain origin story may not be quite well-regarded enough to be named Best Picture, Joaquin Phoenix’s central performance – for which the actor won the Golden Globe – will likely earn him an Oscar. Phoenix has previously been nominated for Best Actor twice (Walk the Line, The Master), and once for Best Supporting Actor (Gladiator) – chances are, 2020 will be his year.

Looking to take the prize from under Phoenix’s fingers is Taron Egerton. The Kingsman actor’s portrayal of Elton John won rave reviews, plus the Oscar voters love an actor playing a real-life person in an autobiography (just look at Rami Malek winning last year for Bohemium Rhapsody), making him a frontrunner.

Underdog: Oscar voters also love a comeback, and while Eddie Murphy has decidedly not called his performance in Netflix’s Dolemite Is My Name “not a comeback”, to everyone else, this feels like the first time Murphy has appeared on-screen in a role worthy of his talents in an age. Likewise with Adam Sandler in Uncut Gems, whose performance as the gambling wild-card is hugely impressive.

Then there’s Robert De Niro in The Irishman. Despite being the movie’s central character, De Niro has not received any BAFTAs love for playing the eponymous Irishman. Perhaps the Oscars will reward the actor for his crucial, decade-spanning role in Scorsese’s twilight masterpiece.

Likely winner: Oscar voters love a good transformation, and few actresses have changed as much on-screen this past year as both Renée Zellweger or Charlize Theron. While Judy may not have been the critical darling director Rupert Goold was hoping for, there’s no denying Zellweger’s central performance – playing a turbulent Judy Garland – is astounding. (Gary Oldman in Darkest Hour is a recent example of a middling movie with a great performance that saw its leading star win gold.)

Hot on Zellweger’s red diamond-encrusted heals is Theron, whose portrayal of Fox News anchor Megyn Kelly in Bombshell is uncanny to the point of being deceptive. If Theron did win, it would be the second time she’s taken home Oscars gold, having won the same award in 2004 for Monster.

Underdog: Lupita Nyong’o may have been snubbed by the BAFTAs, but her dual role in Jordan Peele’s Us is still being widely considered an Oscars frontrunner. Should she rightly be nominated for the award, then Nyong’o will have an uphill battle to defeat Zellweger and Theron, yet there’s still a chance she could take home the prize.

Also vying for Best Actress is Saoirse Ronan, whose performance in Little Women has received huge acclaim. As mentioned above, Little Women has been somewhat ignored by awards voters so far, yet Ronan’s performance has still gotten through to voters, and she picked up nominations at the Globes and BAFTAs. Chances are, she’ll get the Oscars nod, too.

Contenders: Brad Pitt (Once Upon a Time in Hollywood), Tom Hanks (A Beautiful Day in the Neighborhood), Anthony Hopkins (The Two Popes), Al Pacino (The Irishman), Joe Pesci (The Irishman)

Likely winner: Brad Pitt won the Globe. He’s nominated for the BAFTA. He’s probably going to take the Oscar for Best Actor back to his pad and throw it next to his Best Picture trophies for producing both The Departed and 12 Years a Slave. Oddly enough, Pitt has never won for acting (despite being nominated for his roles in Moneyball, The Curious Case of Benjamin Button, 12 Monkeys) and this could be his year.

The most likely person to steal Pitt’s thunder is Joe Pesci, the iconic actor who came out of retirement to appear in Martin Scorsese’s The Irishman. His performance is generally seen as having the edge on Pacino’s equally brilliant role in The Irishman, yet the two going up against each other could divide the votes and give Pitt the victory.

Underdog: Everyone in Parasite gives an astonishing performance, but none so much as Song Sang-Ho. The Korean actor is mesmerising as the central father figure and it would be a victory for the movie if he got nominated. However, he’s been nominated for Best Actor at the Director’s Cut Awards, yet Best Supporting Actor at the AACTA International Awards. A division in which category he’s being nominated in could confuse things and leave him without a nomination.

Likely winner: Marriage Story’s two central performances – by Scarlett Johansson and Adam Driver – are both winning acclaim, yet it’s Laura Dern’s portrayal of a divorce lawyer that looks set to win at the Oscars. As a two-time Oscar nominee, previously for her roles in Rambling Rose and Wild, this could finally be Dern’s hour.

Her major competition comes from Margot Robbie, who was nominated for two BAFTAs – one for Bombshell, the other for Once Upon a Time in Hollywood. Either could land her the Oscar nomination and whichever one does (more likely Bombshell) stands a good chance of taking her over the winning line due to goodwill toward the dual roles.

Underdog: Neglected by the BAFTAs, Jennifer Lopez’s performance as a stripper in Hustlers has been the toast of the Internet since debuting on the big screen in 2019. With Lopez having trained hard for the role, and put in an excellent performance, perhaps she can steal the award from Dern.

Then there’s also Florence Pugh, who managed to turn the normally neglected character of Amy into a starring role in Little Women. Pugh also appeared in Midsommar earlier in the year, which would have – if the Oscars weren’t quite a s horror averse as they are – landed her a Best Actress nomination. Alas, her performance in Little Women playing the older and younger Amy would be a well-deserved winner.

Likely winner: Sam Mendes won the Golden Globe for Best director and could very well do the same at the Oscars for his single-take war movie 1917. Watching the two central soldiers struggle through No Man’s Land is breathtaking, and could have been much less impactful in lesser hands. (Worth noting that Roger Deakins will almost certainly be nominated for Best Cinematographer for 1917.)

While Mendes may have snatched the Globe, this category’s still all to play for. Martin Scorsese’s decade-spanning The Irishman took years to bring to cinemas (and Netflix), while Quentin Tarantino’s Once Upon a Time in Hollywood is the culmination of a career’s work. Then there’s Parasite’s Bong Joon-ho, who could follow on from Alfonso Cuaron (Roma) and take home the award for a foreign language movie.

Underdog: Women. Any woman. The BAFTAs and Golden Globes have both had all-male nominees this year for Best director. And it’s not for lack of talent. Greta Gerwig (Little Women), Marielle Heller (A Beautiful Day in the Neighborhood), and Lulu Wang (The Farewell) are all in contention, each having directed brilliant awards-contenders. Another outlier is Olivia Wilde, whose deliciously fun Booksmart hasn’t picked up much awards heat, despite being one of last year’s finest movies.

Of them, Gerwig stands the best chance, having also been the last woman (nominated in 2018 for Lady Bird) to pick up a nomination in the category. Let’s hope the male voters have gotten over their alleged Little Women problem, and Gerwig can secure a much-deserved nomination.

I’m the Entertainment Editor over here at GamesRadar+, bringing you all the latest movie and TV news, reviews and features. I look after all the Total Film and SFX articles that end up on the website and am in charge of their Twitter accounts. So if you see one of them suddenly Tweeting about Lord of the Rings being the best movie series of all time, that’s probably me…